The plexiglass barriers that will separate Harris and Pence at the debate probably won’t stop coronavirus-laden aerosols, scientists say

When Kamala Harris and Mike Pence face each other in the vice presidential debate on Wednesday, they will do so through plexiglass barriers – an additional protective measure approved by the Commission on Presidential Debates, according to Politico.

The plan came about after a five-day period in which at least a dozen White House and GOP officials, including President Donald Trump, tested positive for the coronavirus. Plexiglass will also separate Harris and Pence from moderator Susan Page.

Harris has supported the move to increase coronavirus-related precautions. However, Pence’s spokesperson, Katie Miller, seemed to mock the plexiglass plan, referring to it as a “fortress.”

Pence also decided not to self-isolate after attending several events with people who later tested positive, including a ceremony for Supreme Court nominee Amy Coney Barrett last Saturday. The CDC recommends a 14-day quarantine for anyone with known coronavirus exposure. The vice president tested negative for the virus on Monday.

The coming debate won’t be the first to use a plexiglass divider. Sen. Lindsey Graham’s Democratic challenger, Jaime Harrison, used a similar barrier during their debate.

However, experts don’t think the plexiglass is likely to protect Pence, Harris, Page, or any of the debate’s other attendees.

“Those barriers really don’t do anything,” John Lednicky, an aerobiologist at the University of Florida, told Business Insider.

That’s because when the candidates begin speaking, they will expel both large droplets and smaller particles called aerosols.

Aerosols are small and very lightweight; as a result, they can hang suspended in the air for minutes to hours. Lednicky authored a study earlier this summer that showed that coronavirus-laden aerosols can travel as far as 16 feet indoors. The findings are not yet peer-reviewed, but they have led Lednicky to believe that a plexiglass barrier won’t stop these particles from traveling.

The distance the candidates will stand from one another however — 13 feet — is likely enough to protect them from the larger droplets that people expel when they talk. These are relatively heavy, so they fall to the ground fairly quickly and don’t usually travel much farther than 6 feet.

To imagine what aerosols look like, picture cigarette smoke

To understand how the spread of coronavirus aerosols might look if they were visible to the naked eye, think of cigarette smoke.

That’s how Linsey Marr, a leading aerosols researcher at Virginia Tech, thinks about them. Imagine a group of people, she said on Monday: “What if all the people in that situation are smoking? Are you going to be exposed? Will you end up breathing a lot of cigarette smoke?

“If the answer is yes,” Marr continued, “then you need to do something to change that situation, to reduce the risk.”

To follow that analogy, imagine Harris and Pence smoking cigarettes onstage for 90 minutes. A plexiglass barrier might stop some of that smoke, and would 13 feet of distance helps, too. But plenty of smoke could still get around and above the barriers. 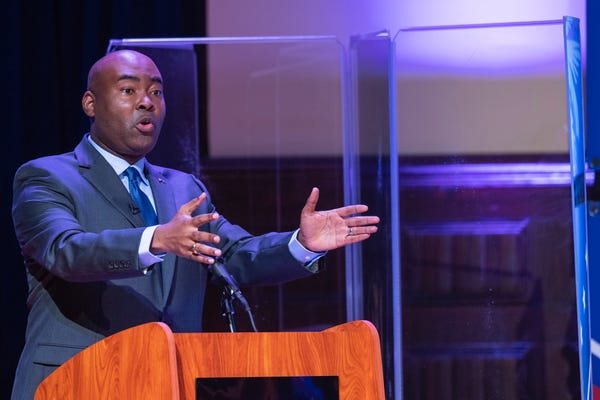 That risk is lower in a building with good air circulation, though, according to Lednicky. If the air within the University of Utah’s Kingsbury Hall, where the debate is to be held, gets ventilated properly, the aerosols could be circulated outside and new air brought in.

Good air circulation, he said, is when a room’s air gets replaced by outside air six times per hour.

But Lednicky said he doesn’t have information about the hall’s air circulation. If the auditorium’s air quality is poor, he added, “the risk gets higher and higher and higher over a period of time” as aerosols build up.

To truly make the debate safe, Marr said, she would require all attendees to wear masks – especially Harris and Pence.

“We release far more droplets and aerosols when we are talking than when we are just breathing,” she told Business Insider. “Thus, it’s especially important that those who are talking, in this case the two candidates, wear masks.”

Lednicky also said he thinks the candidates should wear masks. Or, he said, they could perform the debate outdoors.

Back to the smoke analogy: If Pence and Harris were each smoking outside, 13 feet apart, the smoke would be far less likely to reach the candidates or other attendees.

Alternatively, Lednicky said, the safest approach would really be an option we now all know well: “Zoom.”

Suffering John Lewis stands at a crossroads on the high street