A coronavirus stimulus deal between Democrats and the White House fell apart largely because the sides couldn’t agree about how much money to give budget-crunched states, according to one of President Donald Trump’s top advisers.

“Where the Democrats came down was so far out of — no pun intended — out of left field in terms of the trillions of dollars that they wanted to bail out states and cities,” Brooke Rollins, the acting director of the president’s Domestic Policy Council, said Tuesday in an exclusive interview with Insider.

Trump announced his surprise decision to walk away from another stimulus package in a series of tweets Tuesday. The decision came a day after he left the Walter Reed National Military Medical Center despite still being sick with COVID-19, the disease caused by the coronavirus. While hospitalized, the president had used his prolific social media account to urge Congress to reengage with his administration on negotiations over a new stimulus bill.

Stocks fell sharply after Trump’s announcement on Tuesday, with the Dow Jones industrial average plummeting almost 400 points. The talks on a new stimulus broke down while the US economy continues to reel from the effects of the coronavirus pandemic, which has killed more than 210,000 people and put millions out of work as businesses shut down.

Speaking with Insider just minutes after the president’s tweets, Rollins said there were several factors that influenced his decision to back out of talks. But she singled out the Democrats’ demand for funding to the states as a no-go because the White House saw that as primarily intended to help bail out blue states and cities whose governments had mismanaged taxpayer dollars.

“I think he just realized that it’s just so far apart, and ultimately to best serve the country it’s better to wait and revisit once we’re out of the political maelstrom,” she said.

Rollins said she wasn’t sure how close House Speaker Nancy Pelosi and Treasury Secretary Steven Mnuchin had been to reaching a deal before the president’s announcement. The Domestic Policy Council that she leads is an influential body in the White House that’s made up of top Cabinet members. It also meets regularly with Trump.

“I know we tried really, really hard,” she said.

Read more: Meet the 24 most powerful people advising Trump on healthcare as the president vies for a second term 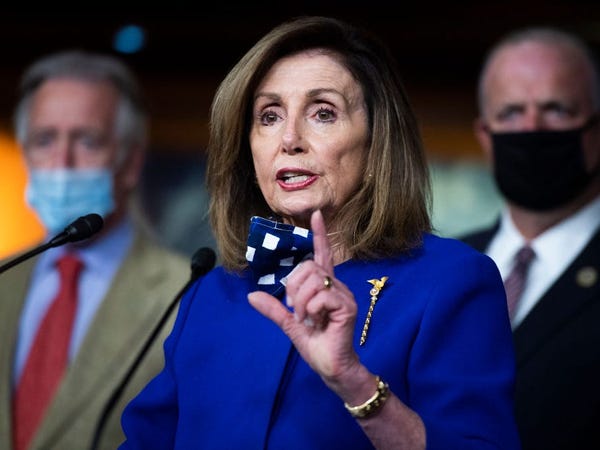 Senate Majority Leader Mitch McConnell told reporters he agreed with Trump’s decision. “I think his view was that they were not going to produce a result and we needed to concentrate on what’s achievable,” the Kentucky Republican told reporters at the Capitol.

For her part, Pelosi said the president was “putting himself first at the expense of the country.”

Democrats wanted the money to be used to help with coronavirus relief efforts or to plug budget shortfalls. But Republicans countered that states still hadn’t spent most of the $150 billion that had been allocated to them as part of the CARES Act, a $2 trillion stimulus Trump signed into law in March.

The existing pot of money isn’t allowed to be used to plug budget holes, but Republicans have shown support in the past for giving states more flexibility in how they could spend the funds.

Democrats also wanted $225 billion for schools and colleges, which was more than double the funding Republicans did, of as well as reinstitute a $600-a-week boost to unemployment payments.

After House Democrats passed their bill on Thursday that included these provisions, Pelosi seemed open to continuing to work out a deal with the White House that would include an airline bailout to keep workers on payroll. The White House offered a $1.6 billion package, but it wasn’t clear it would be able to clear the GOP-controlled Senate.

When Trump announced his decision to ditch a stimulus for now, Pelosi had her own explanation for why a deal fell apart.

The California Democrat said in a letter to her caucus that the White House wouldn’t meet her party’s demands on funding child care and that it wouldn’t allow them to set enforceable coronavirus workplace standards. She said the White House also refused to back a national plan to “crush the virus” and to pour money into state election efforts or the Post Office.

Read more: The Trump administration is a hollow shell of itself and can’t afford to be sick right now

Donald Trump just kicked the US economy in the teeth

Get the daily email that makes reading the news actually enjoyable. Stay informed and entertained, for free.
Your information is secure and your privacy is protected. By opting in you agree to receive emails from us. Remember that you can opt-out any time, we hate spam too!

Bitcoin hits highs even as analysts warn on ‘mainstream moment’

A U.S. Supreme Court first: arguments by teleconference including major one involving Trump